Wow, I cannot believe I just did that.

Rewind to training over the summer. Without Celina Annable and Ashley Schwab getting me out of bed to run 8 miles twice a week, I didn’t run nearly as much this training season. I was lucky to run 5.5 miles twice a week and then my long run on the weekend. However, I did add CrossFit into the mix twice a week for cross training, but while I feel stronger, I don’t think it helped as much as I had hoped it would.

Fast forward to a month before the race. I flew to Denver for a day trip on 9/11 to interview at a digital marketing agency. My flight on the way in was early which only meant one thing – my flight home would be delayed. And it was. But only by an hour, so not terrible. However, getting up at 3:30am and not getting home until around midnight was rough – especially the night before my first 20 miler. Despite the perfect running weather, I only made it 18 and had to have my sister, Casey, come pick me up.

A couple weeks later, our friends, Matt and Katie Feley got married in Mexico. The Monday before we left on Wednesday, I ran my second 20 miler. And I made it! Whew. I had to make sure I had at least one decent 20 miler under my belt before 10/11. We left on Wednesday and spent Wed-Sunday on an adult Spring Break. Way too much food and booze and way too much fun. I wouldn’t change a thing – I even got two treadmill runs in at the resort – 6 and 7 milers.

Oh, the 9/11 interview – it went great! So, I flew from Mexico directly to Denver, CO where I started my new job on Monday, 10/5. Fortunately, travel was really easy – getting up on Monday morning after Spring Break to start a new job was not. But I did it! I even got in two training runs of 3 miles in the mile high city.  Full days of training and dinner/drinks every night was my second marathon of the month – behind Mexico.

Now, onto the third…

Originally, I thought about flying directly to Chicago from Denver on Friday, 10/9, but decided against it – too much to pack! Plus, my mom and my younger sister, Morgan, decided to make the trip. So, on Friday I flew home at got to Indy around 8pm. Woke up on Saturday and drove with my mom and sister to Chicago.

After packet pickup, we checked into our hotel, The Hilton on Michigan Avenue. Thank you, mom.  This was actually the hotel all of the elite athletes stayed in – amazing.

Considering what my body had been through the last couple weeks, I was exhausted. I wasn’t feeling great, so I stayed behind while my mom and sisters went out and about in Chicago. Since they are the best, they ordered takeout pizza and pasta and brought it back to the hotel for my pre-race feast.

I went to bed at 9pm feeling like I had a fever. I was terrified that I would wake up the next morning feeling worse and not able to run. Fortunately, I got a great night of sleep and this wasn’t the case.

My walk to my starting corral was about 15 minutes – and chilly – perfect running weather. I crossed the starting line about 7:45am. The first half was a blur of just focusing on pacing myself and not going out of the gate too fast. Last year, I ran 3:56:59 and I knew I wasn’t going to PR this year, so my goal was under 4:30 (I did the Marine Corps Marathon in just under 4:30).

By 13.1, I was starting to wonder how I was going to do the rest. I finished the half in 2:03:45. I told myself at this point that if I could get to 20 without stopping then I could walk/run the rest. My cheerleaders were planning to be around mile 14-18, so I’d started looking out for them which helped distract me from the fact that I still had over two hours left to run.

Just after mile 18, I spotted my sister, Casey, wearing a bright blue jacket and jumping up and down. Tears fell instantly. It’s hard to control your emotions when your body is so completely depleted. I was so excited and relieved to see the familiar faces of Casey, my mom, Morgan, and Casey’s boyfriend, Brad. I knew they’d driven around downtown like crazy trying to figure out the logistics of spotting me. After the race, my mom told me that they were on plan C at that point…which makes me even more grateful that it worked out to be able to see them. Morgan had my husband, Zach, on FaceTime so I got to see him and a quick glimpse of Dug (our dog) and my in-laws cheering me on from Ohio. Only 8 miles to go! 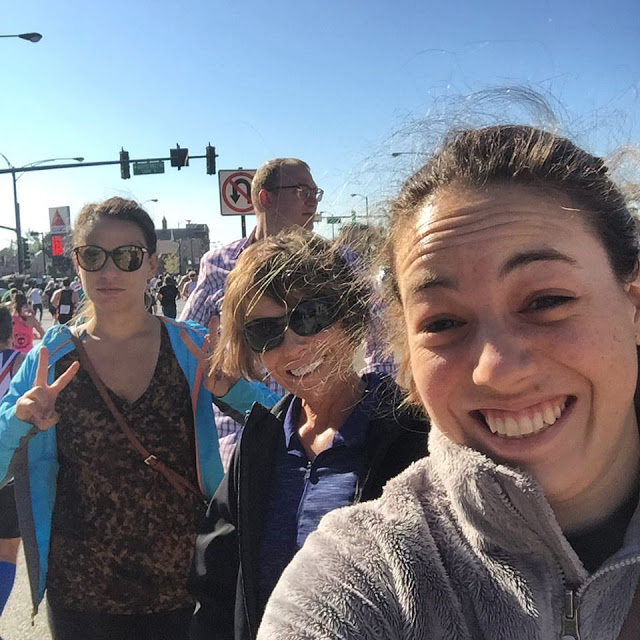 Back to my earlier thought – if I could get to 20 then I would let myself walk a bit. Well, I got to 20 and I was hurting. So. Much. But what I started thinking is that it would hurt worse to stop – my legs were on fire and I felt like I could cramp at any second (something that has never happened to me before during a race). I kept running. I just kept fucking running. That’s what I kept telling myself to do… keep fucking running. Pardon my French, but I wish someone could tell me how many times I actually thought that to myself. Probably a million.

Each remaining mile felt like it took twenty minutes. The best thing about Chicago is all of the spectators. 1.7 million or something like that – maybe more this year because the weather was outstanding (for watching, not necessarily for running). I had a shot of beer somewhere around mile 20 and then an orange popsicle. God bless the woman with the popsicles. The last couple miles I knew I could do it without stopping. Yay! Close to 800M to go, people were handing out full PBRs – OK why not? I cracked one open and it sprayed everywhere – I raised it above my head and let the beer spill all over my face (almost a straight arm, Sarah Perras). It’s possible some got in my mouth, but it was more for the spectator’s entertainment than my refreshment. I was elated to be almost there.

Words can’t explain the feeling you get when you see the actual finish line. Relief. Excitement. Pride. Pride is probably the best word. I was so incredibly proud of myself for finishing. Tears again. So many tears, but happy, proud tears.

Thank you to my cheerleaders, mom, Casey, Morgan, dad, Brad, Zach, Pam & Joe, Dug, Accidental Runners, friends, spectators, and volunteers. Thank you for believing in me.

Now onto the next one… Philly!

This site uses Akismet to reduce spam. Learn how your comment data is processed.