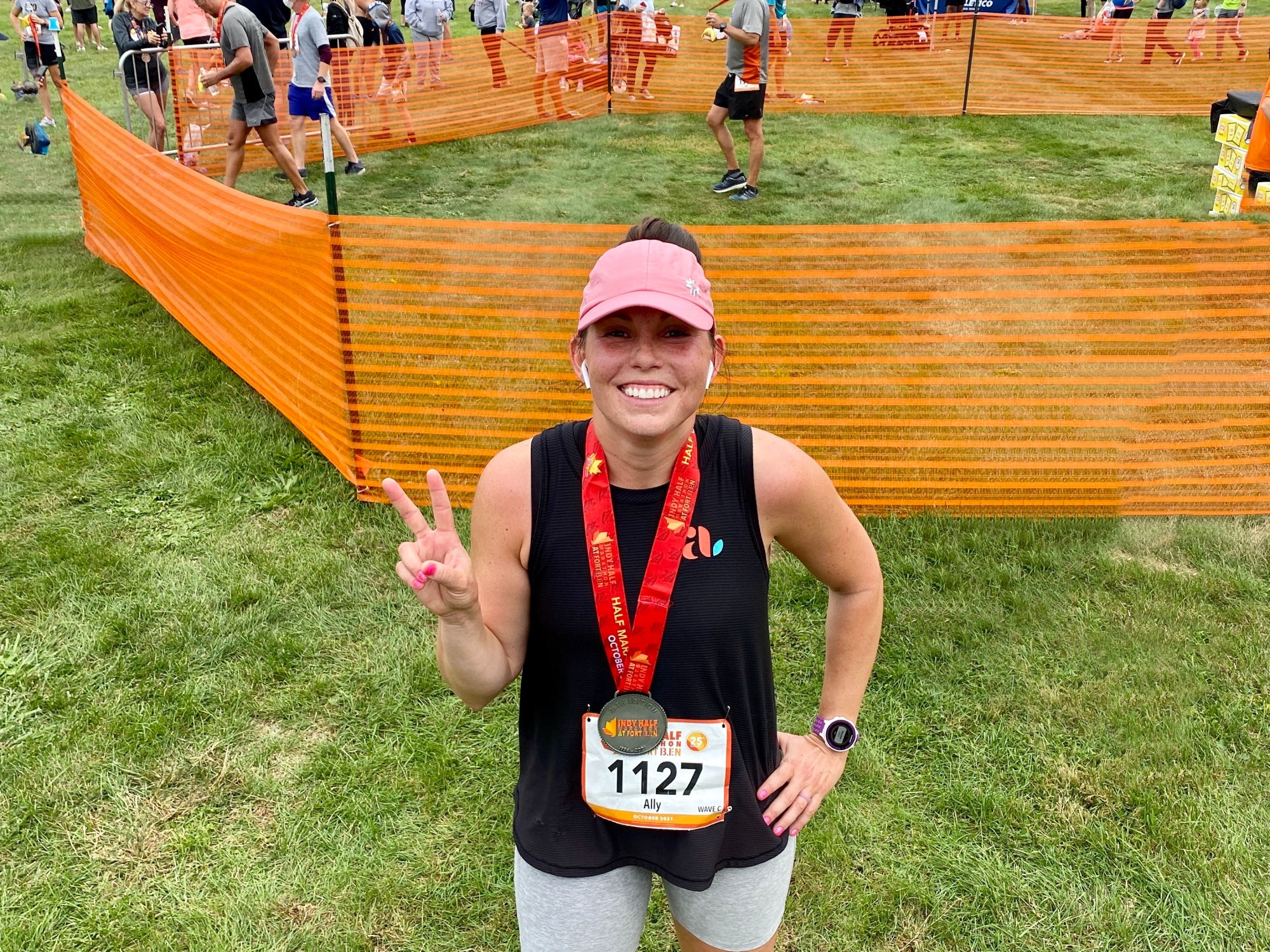 In January 2021, I joined the board of Beyond Monumental, an organization actively supporting youth health and well-being by providing access to exceptional events and programs centered around the sport of running. It’s the first board I’ve been a part of and I’m grateful for the opportunity to work with such a talented team. So, that’s a big reason why I decide to *finally* run The Indy Half at Fort Ben.

I’ve pretty much run all of the local Indy races, but the hills of Fort Ben have kept me away (even though I’ve run the Geist Half and the NYC Marathon – both a bit hilly). Don’t let this happen to you! I highly recommend running this race. It was a great event and beautiful course which distracted me from the hills (mostly). There’s really just the one big one that’s between miles 10 and 11. This year, there was a race within the race called “Kill The Hill”. There were timing mats at the bottom and top of the hill (about 400 meters). I did my best and felt like I was sprinting up the hill but was probably barely moving. 😂

For this race, I used a running coach for the first time, Rachel Michelle Running. Thanks to Instagram / Athlete Bouquets for bringing us together. I attribute my performance to the training Rachel assigned me these past couple of months. Especially with a new baby, it’s been very helpful to have someone tell me exactly what I need to do. And I’m a rule follower and people pleaser, so I do it. More detail on this topic in a later post…

The weather was near perfect for racing. It was a touch cool at the start, so I came prepared with a space blanket (pro tip: I save mine for this purpose). There were also bonfires and haystacks set up for runners to stay warm. Parking was plentiful and very easy, there were tons of porta potties, and my lovely friend, Jen Magley, emceed the event. The race started at 8am, so I got there around 7:15 to give myself more than enough time – especially since it was my first time running this particular race.

The race started on time and there were a few waves of runners that were spaced a few minutes apart. It felt like a “normal” race, but not too crowded. Some people were wearing masks, but not many. I felt perfectly safe and very comfortable at the start. For some reason, I get super nervous the night before races and usually the morning of – even though it’s not like I’m trying to win. But at the start of this race I think I was so amped to be back to in person racing that I was ready when Jen called our wave.

Rachel assigned the below splits for a race plan. I told her the times scared me. Also, I’ve never had a plan like this going into a race. She said, “You are capable of more than you think you are,” and that became my mantra.

I really didn’t think I could come close to doing this, but it turns out I was capable of more than I thought. Here are my splits from the race. So much for not going out too fast… at least I immediately reigned it in.

For context, here are the splits of my longest training run…there was a bit of speed work but not a ton.

The first half of the race flew by. I was so happy to be running a race again and it was beautiful running through the park. For several of the first miles I was behind an older man with a shirt that said, “Running Changes Everything.” I really liked that shirt.

I also created a brand new running playlist just for the race instead of using my “NYC Marathon 2018” playlist that started as a Chicago Marathon playlist years ago and I’ve added so much to it that it’s 19+ hours of music that I usually just put on random. So, I decided I wanted to make a 2 hour playlist of songs I really like to run to. That helped a ton. Here’s a link that will hopefully work.

Rachel was at mile 6 and again just after 7. She brought her three kiddos out to cheer on her runners. Seeing someone you know on the course always gives some extra energy. And just like that, I was already at mile 8. Somewhere along the way these thoughts came and went, “This is what I’m meant to be doing.” “I love this shit.” “Can I really f*cking keep this up?” “Where is that hill?”

I saw a runner dressed like Forrest Gump, wanted to take a picture, but didn’t have the energy to spare.

At every water / Nuun station, I hydrated and dumped water on my head. It wasn’t super hot, but hot enough that this felt really good. I took two Gu gels on the course – around miles 4 and 8. We passed the mile 9 marker at around 3 miles and I was really happy to see it again. The hill was just around the corner.

Turns out, I didn’t run very slow up the hill, I made pretty good time. 6:48 pace and 1:41 to cover ~320 meters – not sure on the elevation, but it was quite the hill. I made some lame jokes on the way up like, “What hill?” and “They should call this f*ck the hill.” and made a couple other runners (sort of) laugh. It’s hard to laugh when you’re 10+ miles into a half and running straight up, but Rachel told me to smile as much as possible to remind myself that I was having fun, so I did. I probably looked insane. Only the race photos will tell…

More thoughts…”Only two miles left now.” “Every two minutes is ~10% of the distance remaining.” “Two minutes is nothing.”

Then, one mile to go. I turn to this guy to my left – there’s really no one else around us – and said, “This is when the race starts.” He looked at me and said, “Oh, you can just pass me.” I realized he thought I wanted to race him to the finish so I immediately tried to explain that I meant that this is the hardest part. It was funny. I slowed down a touch so he new I really wasn’t trying to race him and now I blame him for the 9 seconds that I should have been able to shave off had I known I was so close to two hours.

And then, “Hey, there’s the 60 year-old guy I helped at packet pickup.” I caught up to him. He was wasn’t wearing a shirt, just red shorts and knee braces. I asked if he remembered me and he nodded so I said, “Let’s go get it.” Then I told him that for the record I was going to let him beat me. And he laughed and I confessed that he was probably going to beat me even if I didn’t let him. It was true, he was going faster than I could at the time so I let him drift ahead.

That’s when I looked at my watch. I’m really embarrassed to admit that even though this was my 42nd half marathon, for some reason I was thinking that a 9:17 average was needed to break two hours. (Sorry, Rachel) Imagine my surprise when I looked down with just over .1 to go and realized I needed to haul some serious ass to make it. Oops. So I was the asshole running as fast as I could at the finish. But I was also a really proud, incredibly strong, badass mother runner asshole. Those damn 9 seconds…

My husband, Zach, surprised me at the finish with our two girls (still in their PJs) and pumpkin donuts. That was certainly the highlight of this race. Sydney (our 4yo) saw my medal and asked, “Mommy, did you win?”. She wanted to eat all of my post race snacks, so I begrudgingly shared them with her. I hope there’s a day when she wants to run half marathons with me.

After about half a beer, Zach realized it was going to rain and he had his Jeep top down. So, we hustled to get to our cars which, thankfully, weren’t too far from the start/finish. On the way home, Zach got wet stopping for Freddy’s burgers and a vanilla milkshake for me. God bless him. 😂

Now, onto the Monumental half on 11/6! Register here to join me.

This site uses Akismet to reduce spam. Learn how your comment data is processed.